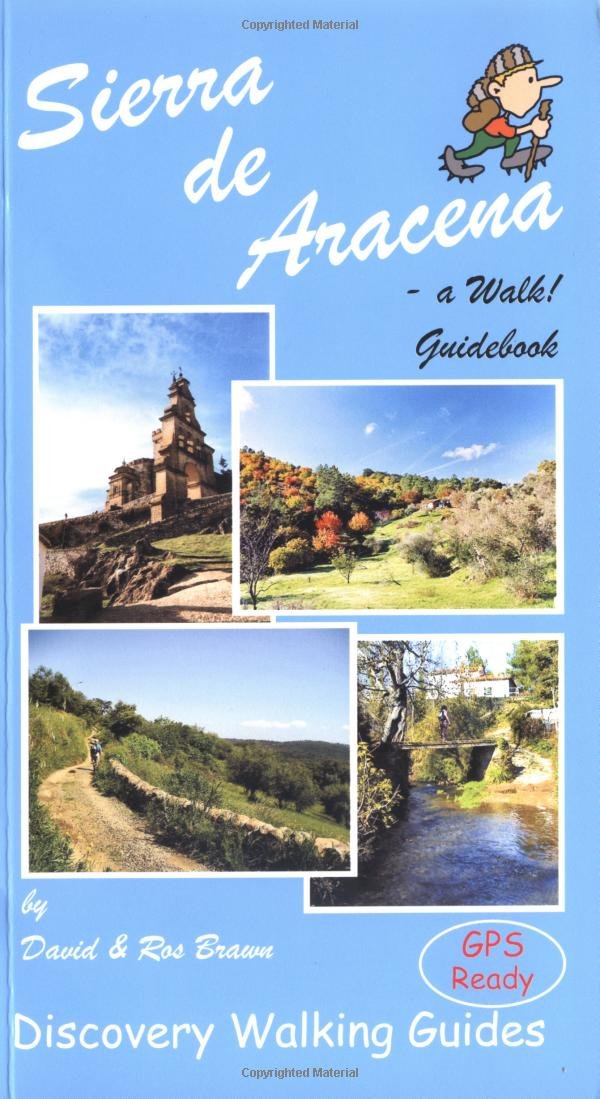 Introducing you to the beautiful region of Sierra de Aracena, this guidebook has 27 detailed walking routes backed by useful information. Every route has 1:40,000 scale colour mapping from Tour & Trail Map, plus GPS Waypoints for pinpoint navigational accuracy.

A hundred kilometres northwest of Seville lies a region of truly unspoilt rural Spain. Once a province of Portugal the Sierra de Aracena encapsulates almost everything that we look for as the idyllic walking destination; rural beauty in flora and fauna, breathtaking landscapes, unspoilt towns and villages linked by old donkey trails. All it lacks are high mountains.
The Spanish have known about this isolated region for sometime and arrive at weekends and in mid-summer, but on weekdays and out of season it returns to peaceful tranquility. Few ‘outsiders’ know of this delightful region and you can be the first to read about it in English. We first discovered the region five years ago, when we thought it too isolated to justify a guide.
Since then we have returned regularly, completing our walking research and map surveys in Oct/Nov 2003 and final walking research in May 2004. Now we feel the time is here to introduce you to our secret. Picture sloping meadows dotted with Cork Oaks where herds of inquisitive Iberian black pigs roam at will in a piggy paradise, switch to pollarded Chestnut trees with lively herds of goats, switch to the flock of sheep and lambs that graze outside the apartments at Villa Turistica Fuenteheridos, add in horses and donkeys grazing amongst the trees and meadows and you have the picture of an idyllic bucolic landscape.
The wild life is equally impressive, we saw two black vultures on our first day and another two days later. Wild flowers abound like nowhere else. Botanists arriving in Spring will think they have landed in paradise.
At first we tried keeping notes of the species, but had to give up because there were so many including several we had not seen before. The undergrazed meadows are a carpet of colour from the flowers. Wild Peonies colonise the chestnut orchards west of Castano del Robledo.
Occasionally one species will dominate a meadow or hillside but normally there is a complete mix of species lining our walking routes. Keen plants people should double our walking times just to allow time to marvel at the wild flowers. And the walking, with settlements linked by a rural network of tracks and trails centuries old you will not be seeing much of the quiet tarmac roads in the region.
Tracks and trails range from immaculate cobbling to occasional cobbling to dirt and some are eroded by storm damage. Most of the time we are on clear well-made trails but be ready for some rough stuff. This is not a mountainous region but the steep sided ridges that comprise the Sierra de Aracena have plenty of ‘puff and grunt’ ascents, most just melt away but Linares de la Sierra to Alajar when we were caught in a downpour was quite hard work.
‘Adventurous leisure walker’ is how we would catagorise the walking with plenty of ups and downs so a moderate level of fitness is needed. Sierra de Aracena is far from the realms of mass tourism and the nearest you will find to crowds are busloads of Spanish pensioners visiting the Grutas de Maravilla caves in Aracena and the famous ham factories in Jabugo. Horse riding holidays are becoming popular, expect jodhpurs with breakfast at the Sierra de Aracena Hotel and Finca Valbono.
Headwater offer an ‘Undiscovered Andalucia’ week of guided walking in the region. We flew to Malaga, picked up a pre-booked Peugot 206 and drove the 300 kilometres to stay at Villa Turistica de Fuenteheridos. There are hotels and modern hostels in Aracena, Fuenteheridos, Grazalema, Almonaster and La Posada in the country north of Cartagena; full accommodation information is in the book.
In Oct/Nov 2003 we visited the Feria de Setas in Aracena to marvel at the amazing wild mushrooms collected from the local woodland. This time it was the Feria de Animales like a small county show for cattle, sheep, goats and pigs; but mostly an excuse for the regions farmers to get together for three days of ‘Archers’ style conversation, eating and not a little drinking. “Sierra de Aracena – a Walk! Guidebook” will introduce you to this beautiful region through our 27 fully detailed walking routes backed by masses of useful information.
Every route has 1:40,000 scale colour mapping from our “Tour & Trail Map”, plus GPS Waypoints for pinpoint navigational accuracy